One of the greatest pleasures in life is traveling and seeing new places. Now, if you do it on a bicycle, the experience can be transformed into something different and unforgettable.

The most ardent followers of cycling are convinced of this and we talked to some of them, who gave us key information about their favorite routes in the north, center, and south of Chile. These places are filled with attractions for all bike lovers, of all ages and levels of training.

Northern Chile, the bicycle of an old favorite of music’s world

The inspiration for this trip was the road from the Apennines to the Andes. Lorenzo Jovanotti, the famous Italian singer who was a celebrity in Chile during the 90s, embarked on a journey of 4,000 km on his bicycle that included northern Chile. The footage of his trip was part of the documentary series “Non voglio cambiare pianeta” (I don’t want to change the planet).

The 16-episode documentary was filmed during January and February of 2020 and is available for an Italian streaming service. Still, the places that he filled with music, words, descents, and a lot of sweat can be enjoyed by anyone who embarks on this adventure.

Starting in Santiago, he cycled the entire highway (Route 5), connecting the capital with the Chilean north, reaching to the city of La Serena. Then he pedaled for more than 2,000 kilometers, from Isla Damas to Atacama, with only two “light” suitcases: 20 kilos in the bicycle and 20 more as luggage.

He crossed the desert until he reached the city Antofagasta and the town of San Pedro de Atacama, where the strong wind and the climatic oscillations were the most difficult challenges of a “magical, poetic” journey, as Lorenzo explained.

In the Italian edition of Vanity Fair magazine, Jovanotti reflects: “You think of life when you travel.” With a more profound philosophy, one of its gifts is the possibility of getting to know the community of the towns that you visit. Being able to speak to the men and women living in mining towns, people with a resemblance to your mother and father. “I know that I am not alone, even when I am. On these journeys, everyone will accompany you,” he concludes.

Santiago and the center of Chile, a bicycle trip to the mountains

The world-renowned British cyclist Daniel Hughes travels the world looking for the best images on top of his bicycle. He fell in love with the Chilean routes and has pedaled through the Andes mountain range many times. “Valle Nevado is, without a doubt, one of the ten best climbs in the world. For me, I don’t think there is a better place to mount or photograph the planet. 3000m vertically and 58 curves!” he recommends.

Valle Nevado is only an hour away from Santiago. It’s a renowned ski center famous for its fascinating snow slopes, great for all seasonal sports. It’s not a very common route, but if you enjoy the ascent by bicycle, this is an alternative right within Santiago. Hughes advises: “Nothing can prepare you for the greatness of Valle Nevado, no climb on the planet could overcome this. The key is: Together, we start, together we ride, and together we finish.”

The Chilean Patricio Goycoolea has climbed various peaks on his bike for his “Guardian del Valle” project. One of the most challenging ventures has been the road to “Cerro El Plomo” (El Plomo Mountain) near Santiago. “I have traveled high altitudes in the Andes during the execution of my project, which seeks to ascend and descend the highest mountains in Chile by bicycle. These mountains were all sacred spaces, called “APUS” by the Incas.”, he explained.

“This hill has an unknown history for many, and, touring it by bicycle, it is possible to know,” says Patricio regarding Cerro El Plomo. The level of difficulty of this tour is high and exclusively for Mountain bike fans. Patricio and the members of his project advise: “From the start, you have to consider the terrain, which is a lot softer. There is no footprint; therefore, the bicycle will react differently. You must check the suspension, the tires, and be prepared to endure a high mountain climate”, he concludes.

The reward is giant. To reach a sacred place, which offers a palpable silence and quiet, in contrast to Santiago’s noise just a few kilometers away. For four days, Patricio and his team members lived this adventure, perfect for fans of both climbing and cycling. 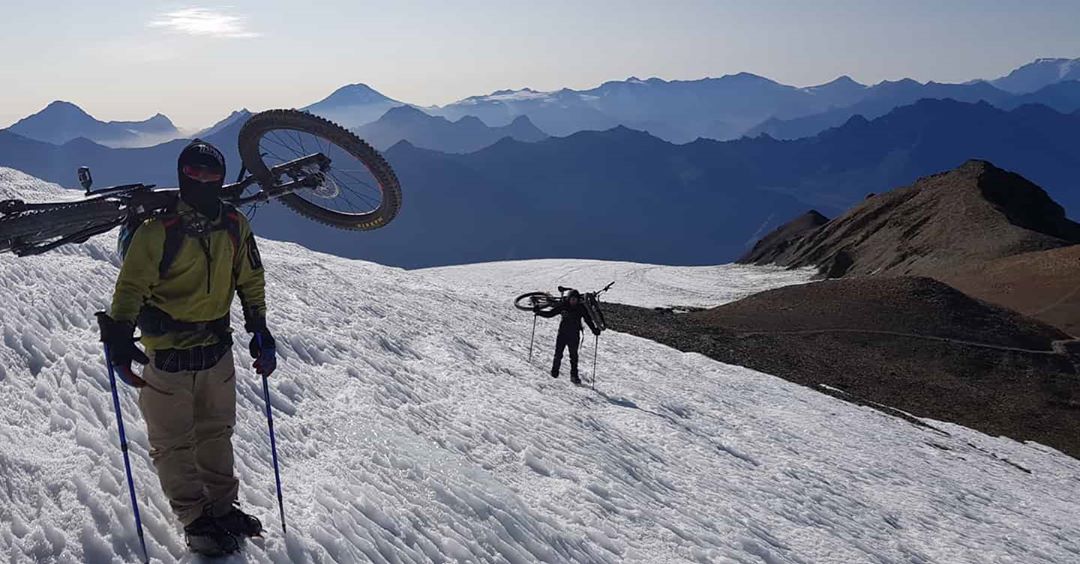 The first thing you should know about for this journey is that you will come across hidden places of unmatched beauty. The second is that the climate is a critical issue and must be considered throughout the trip. However, traveling across Carretera Austral (Austral Road) is a transformative experience.

Are you ready to travel 960 kilometers? The Carretera Austral is the most iconic of Chilean Patagonia. From the city of Puerto Montt to Villa O’Higgins in Aysén, you will discover fjords, native and virgin forests, wild rivers and mountains with unsettling immensity, and the largest lake in Chile, the General Carrera Lake.

Patricio Goycoolea describes Patagonia as “one of the few remaining wild places on the planet” due to the harshness of nature and its geography.  On these routes, he assures that “Puerto Río Tranquilo, Coyhaique, Puerto Bertrand, Cochrane, and Villa O’Higgins, are places that have great potential with incredible trails”.

First, you must start from La Junta, a town located in the northern part of Aysén. There are various lodgings, restaurants, ground transportation, WIFI connection, repair shops, and supermarkets for supply.

From La Junta, it continues south to Puyuhuapi. Then the highway goes throughout the Queulat National Park towards the city of Coyhaique, which has various services and facilities, and is located between the valleys of the Simpson River.

From there, the Carretera Austral ascends through valleys and mountains. A must-see is the route around the coast of the General Carrera Lake. According to Goycoolea, to fully enjoy every kilometer in the bike, “you should go down to Villa Cerro Castillo and continue to Puerto Rio Tranquilo, then Puerto Bertrand, Puerto Guadal and finally reach Chile Chico. There, the best option is to take a ferry that crosses the lake and reaches Puerto Ibáñez. It is a wonderful landscape full of lakes, rivers, native forests, and glaciers. 100% recommended,”.

Across this road, one of its most famous attractions are the Marble Caves. Further south, the landscape becomes especially wild and very rugged. You can take the detour that reaches Caleta Tortel, a famous cypress walkway town, or continue south until you reach Villa O’Higgins, where the Carretera Austral ends.

This area is located 105 kilometers northeast of the city of Valdivia, southern Chile. It includes the lakes Panguipulli, Calafquén, Pirihueico, Pellaifa, Riñihue, Neltume, and Pullingue. Upon arrival, the landscape delivers a warm welcome with dreamy spaces

In addition to the cycling route of the entire Seven Lakes Route in Panguipulli, you can do outdoor activities such as trekking, rafting, kayaking, water skiing, sailing, or recreational fishing. You can also observe all the details of the route, the colors, sunsets, and maintain a deep contact with nature. This experience is the opposite of the tumult of the city life or a busy nightlife. Just peace, surrounded by thermal waters and lakes, nature & wildlife, and the view of both Mocho Choshuenco and Villarrica volcanoes.

If you want to experience a magical and mysterious place on top of a bicycle, with surprising architecture and a great community, you should travel to the grand island of Chiloé.

Known around the world for its iconic wooden churches, which were built by Jesuit missionaries in the 17th and 18th centuries, many are now a National Monument and World Heritage Sites.

To get to the island, you must take a ferry in Pargua, Puerto Montt, arriving in Chacao, a few kilometers from Ancud. From there, the 180-kilometer-long route begins. The island has trails surrounded by forest and sea, with incredible slopes that will test the bicycle’s physical resistance and capacity. You cannot miss the picturesque Dalcahue, the city of Castro, the “Muelle de las Almas” in Cucao, Chonchi, and the Chiloé National Park.

Photography and Travel: Two passions of our “Phototravelers”