Tourism in the far north of Chile has three essential protagonists: the Pacific Ocean, the desert and the highlands. If you don’t know what to do in the Region of Arica & Parinacota, we can tell you that its capital has a number of attractions and important historical and cultural heritage sites, as well as a large number of nearby destinations of interest. Try your hand at adventure tourism, see the oldest mummies in the world and marvel at the region’s history. Things to do in Arica? Here is the answer.

The following article shares some ideas and destinations for your next trip to Arica & Parinacota.

Things to do in Arica

Just a two and a half hour plane ride from Santiago, Arica is known as the city of eternal spring, a place where the sun is always shining and the temperature is ideal. These are some of the attractions you’ll find in the city.

To view Arica in all its splendor, hike up the Morro, a large 130m-high rock that is part of the Coastal mountain range. The museum, monuments and cannons found here are witness to the area’s historical significance and the role it played in the War of the Pacific. You can walk or drive to the top, and even paraglide from the hills of the La Lisera and El Laucho beaches adjacent to the Morro.

Flavor and culture in Terminal Asoagro

To try the more flavorful side of the region, make a trip to the Terminal Asoagro in Arica, a market that sells fruits, vegetables and traditional local products. You’ll also find members of the highlands communities, known for their colorful clothing and warm but timid smiles. This market is the best place to buy some of the most emblematic products of the region, like the Azapa olives, passion fruit and mango.

The neoclassical San Marcos Cathedral was built by the Eiffel company and erected in 1876 at the same site as the previous cathedral which was destroyed by the 1868 earthquake. The building’s beauty, with three naves, an asymmetrical façade and stained glass windows, stands out from the monuments surrounding it: the Morro, the beach and Plaza Colon.

The city of Arica holds a 3-day festival which is one of the most important carnivals in South America. Andean dance corps participate in the festival and showcase the natives dances of the highlands, the afro-descendent communities and inland Arica & Parinacota.

The “Carnaval Con la Fuerza del Sol” is celebrated every year in January or February and attracts more than 100,000 spectators.

In Arica, the beaches are warmer than in the rest of the country. Here you can see people of all ages taking a dip in the Pacific Ocean waters. The city is part of the World Surf Cities Network, an international group that brings together the most important destinations related to surfing. Additionally, it hosts international tournaments with some of the sport’s most noteworthy presenters.

At the Chinchorro and Las Machas beaches, you can often see children and young people learning to run the waves, while the experts focus on dominating the internationally renowned waves like El Gringo, on the former Island of El Alacrán, now an artificial peninsula. 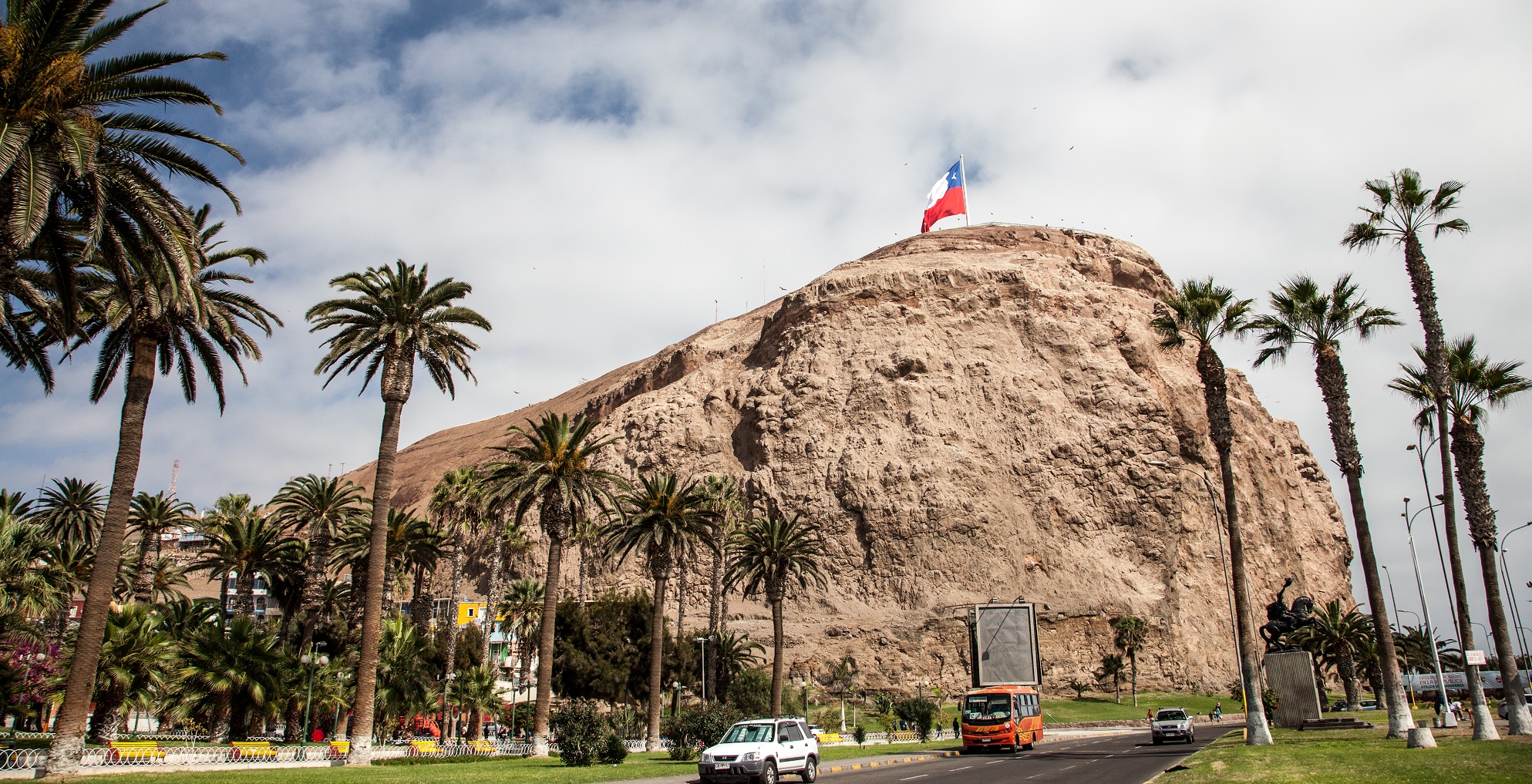 Mountain Climbing and the Anzota Caves

Just 12 kilometers south of Arica are the Anzota Caves, a geological formation sketched out by the ocean. Centuries earlier, they were home to the fishermen of the Chinchorro culture, the first human group to pay homage to their ancestors and death through mummification. Later, during the 21st century, the area’s cliffs were found to be rich in guano, a popular fertilizer for crops in the Azapa and Lluta valleys.

This place is part of the Anzota Caves Route, where you can hike the trails, take a bike ride, access the stairs into the caves, and mountain climb no matter what your skill level.

Birdwatching at the mouth of the Lluta river

Nine kilometers from downtown Arica are the Wetlands at the Mount of the Lluta River, declared a Nature Sanctuary. They are the main coastal wetlands in the north of Chile and cover over 30 hectares providing shelter and food to over 165 species of migratory and resident birds, like the white-cheeked pintail, the buzzard and the Dominican seagull.

The importance of this ecosystem lies in its ability to regulate the microclimate, supply potable water and offer space for recreational activities like birdwatching, photography and walks.

Things to do in Arica? The Missions Route

This cultural route is composed of buildings constructed by the Spaniards in the foothills and highlands of the Region of Arica & Parinacota.

It includes a total of 31 baroque Andean temples that were restored with the idea of recreating the ancient Potosi Silver Route. Today, they have become the epicenter of local life and the site of baptisms and funerals. The tour begins in Coponchile and passes through Codpa, Chitita, Tignamar, Belén, Putre and other quaint northern villages.

The main attraction of this small fishing town lies in its archaeological remains: an indigenous cemetery that dates back over 9,000 years.

Visitors can also enjoy the view from the lookout point, where they can find the monument to the Chinchorro mummies, and get a chance to fish and eat sea bass, giant mussels, sea urchins and octopus along with the Camarones fishermen.

A 35-minute drive from the city of Arica, you can find the oasis that gives birth to the famous Azapa olives. It is also home to the Miguel de Azapa Archaeological Museum which houses the Chinchorro mummies and other original pieces found in the Caleta Camarones indigenous cemetery. Take the opportunity to tour the small nearby villages, such Pachani, Belén, Humagata and Subraya. You won’t regret it!

Codpa is a village within Camarones, located in a valley surrounded by tall mountains, hot springs, ravines and cliffs. This fertile valley is where they produce Pintatani, a handcrafted liquor claimed to be one of the first of its kind in Chile.

Parinacota is a small village, surrounded by lakes and lagoons, is 181 kilometers from Arica and 42 from Putre, with an altitude of 4,000 meters. It was declared a National Monument and Traditional Zone based on its architecture, including the church which dates back to the 17th century.

Putre can be found at an altitude of 3,500 metros, and its stone and adobe church built in 1670 was declared a National Monument. If you visit the Lauca National Park, we recommend one or two days here first to acclimate to the altitude. 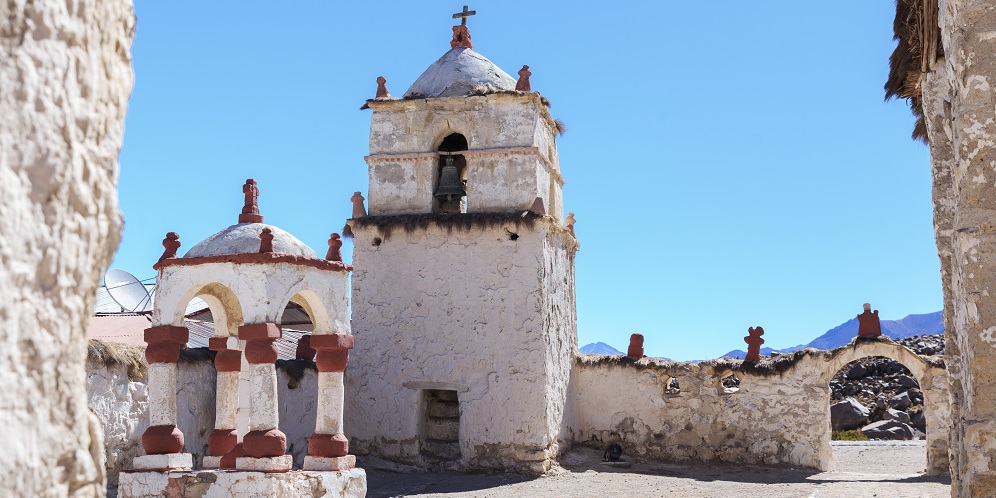 If you drive an hour and a half outside the city of Arica, you can find the Lauca National Park, at an altitude of over 4,000 meters. This park, which is part of the World Network of Biosphere Reserves, covers 140,000 hectares and is known for its breathtaking scenery and the winds across the waters of Lake Chungara. The Parinacota and Romperape Volcanoes overlook the area’s diverse wildlife, including vicuñas,  llamas and Chilean flamingos, among others.

The Lauca National Park has a variety of trails for admiring the scenery and spotting a wide range of flora and fauna, as well as the Las Cuevas, Parinacota and Chungará walking trails, and the vehicle trail to Chacu. Another trail available goes from Parinacota to the Cotacotani Lagoons and Lake Chungará.

Some tourist agencies offer day trips, but if you’re going to go on your own, we suggest first arriving to Putre and then heading up to the national park, so the trip isn’t too strenuous.

Ancestral Travel: 5 Experiences with the Mapuche people
Visit the most impressive glaciers of the Chilean Patagonia